Edward Clug back in Dortmund

It’s so nice to still see the audience enjoying! Here you can see the latest premiere “Stravinsky!”, with the already worldwide noticed choreography of “Le sacre du printemps” and the world premiere of “Petrushka” by Xin Peng Wang.
Trailer 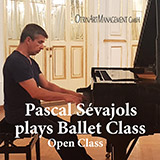 It goes one right after the next – we proudly announce the new release of the series “Pascal Sévajols plays Ballett Class”, now in the edition “Open Class”. You can find more info in the booklet.

We are proud to announce that NDT 1 dancer Chloé Albaret has won the Dutch Swan for best dance performance 2020 for her role in Edward Clug’s creation APERTURE, which premiered on November 29, 2019 as part of the NDT 1 programme Soir Historique.
Chloé about the work with Edward Clug and “Aperture”: “It was my first time working with Edward. I really enjoyed his openness and honesty throughout the creation as well as his specific choreographic language. He often comes up with unexpected ideas that make the process alive and fun creating the particular atmosphere of the piece. I like the way Edward creates a unique world on stage that reflects his personality and he invites us to be a part of it.”
More info 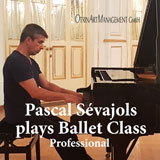 We are pleased to announce that Pascal has recorded a new album from the series “Pascal Sévajols plays Ballet Class”. The work is as usual available on all relevant audio streaming and media service providers. You can find more info in the booklet.

On this day 15 years ago Radio&Juliet was born. The ballet seems prophetic, watching this images today with masks and gloves, becoming everyday life aesthetics. Enjoy this Ballet Classic today and tomorrow on SNG Maribor YouTube Channel, starting at 20.00.#stayathome

Edward Clug back at the NDT

On November 29th 2019 the next opening night of Edward Clug took place with the Nederlands Dans Theatre. For ‘Aperture‘, which was premiered during the evening ‘Soir Historique‘, there are already superlative reviews in the media. Congratulations, Edward and the NDT!
Alexander Hiskemuller-Trouw

The night of the World-Premiere of “Carmina Burana” at the Les Grands Ballets Canadiens de Montréal will be on October 3rd 2019.

“Petrushka”, the new creation for the Bolshoi Ballet by Edward Clug will be live and worldwide broadcasted from the Bolshoi Theatre on May 19th.

Working Conference at the Ludwig-Maximilians-University-Munich

On April 5th and 6th 2019, Methodological Discourses on current Rehearsal Studies will take place within a TWM Working Conference chaired by Prof. Dr. David Roesner and Tamara Yasmin Quick, M.A. Jaš Otrin will present the Results of his Research Study „Rehearsals at the Theatre as an ‚On the job‘ – Human Ressources Development Measure“ at the Conference. Cordially invited to attend the Conference.
Agenda

Guest Lecture at the Ludwig-Maximilians-University-Munich

Within the framework of the Research Colloquium of the Theater Studies Munich (TWM Research Colloquium), a guest lecture by Jaš Otrin entitled „Human Ressources Development in the Theatre“ will take place on January 23rd, 2019. Cordially invited to attend the lecture!
Invitation 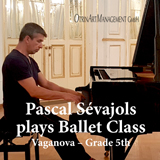 The night of the premiere of “Stabat Mater” at the Les Grands Ballets Canadiens de Montréal will be on October 11th 2017.

On February 25th 2017 the new ballet evening of the Dortmund Ballet, “Kontraste” will be premiered. Edward Clug will create a new ballet called “Hora”. He will use the compositions of the world acclaimed violinist Alexander Balanescu. The Set designer is Marko Japelj and the Costume designer Leo Kulaš.

The Week of Edward Clug

In the week from September 10th until 17th the Slovene National Theatre Maribor is celebrating our artist Edward Clug and his 25th anniversary of his artistic career.
Congratulations Edi!

Within the Department of Theater Studies at the LMU-Munich, Prof. Dr. David Roesner led a Master Course in the Winter Semester 2015/16. The Study accomplished within this Framework „Where is the New Music Festival situated? An analysis of the two new Music Festivals Münchener Biennale and Muzički Biennale Zagreb“ by Jaš Otrin is published under the following Links:
Version1
Version2

New CDs on the market

Our pianist Pascal Sevajols has recorded two new CDs for Ballet Class, exclusively with improvisation music (Intermediate and Vaganova Grade 7th). The release date ist November 30st 2015. The purchasing price is 19,90€ (incl. VAT). The CDs can be ordered per Mail (info@otrinartmanagement.com).
For more Information about the configuration please have a look at the following links:
Intermediate
Vaganova Grade 7th

Our pianist Pascal Sévajols is traditionally playing at the Biarritz Académie Internationale de Danse. The Summer Academy is taking place from August 2nd until August 7th 2015.

Edward Clug has been awarded by the magazine “Tanz” as the “Bearer of hope 2014”
www.kultiversum.de

Pascal Sévajols is holding Master Classes for the pianists of the National Ballet of China.

Pascal Sévajols is invited to participate at the “International Ballet Summer School Carcassonne” from July 28th until August 9th 2014 and at the “Stage International de Danse de Biarritz 2014”.

“Radio&Juliet” is going to have its Australasian Premiere on February 7th 2014 with the West Australian Ballet.

Bojana Nenadović and Wieslaw Dudek are invited to dance the legendary Pas de Deux “Jeunehomme” from Uwe Scholz at the Cellebration Gala “Ulrich Roehm & Friends” on September 15th 2013 in Essen.

Anton Bogov is dancing in September and October 2012 Romeo in Patrice Bart´s “Romeo & Juliet” at the “Teatro dell´Opera di Roma”.

Bojana Nenadović is going to hold Masterclasses at the Codarts Academy in Rotterdam from April 16. until April 27. 2012.

Anton Bogov is dancing the Prince in the Season 2011/2012 at the “Teatro dell’ Opera di Roma” in the version from Slawa Mukhamedov.

Bojana Nenadović was invited to participate at the international Gala Evening at the Theatre “Giuseppe Verdi”. Together with her partner Anton Bogov she will perform the Pas De Deuxs from “Giselle” and “Nutcracker”. The performances will take place on December 9th, 10th and 11th 2011.

Rafael Avnikjan was contracted to stage the ballet “La Bayadére” at the “Teatro dell’ Opera di Roma”. The premiere will take place on October 19th (2011) starring Svetlana Zakharova as “Nikiya”. Bojana Nenadović (Nikiya”) is dancing with her partner Anton Bogov (“Solor”) on October 20st and 26th (2011). Kusha Alexi is dancing “Gamzatti” on October 27th and 30st (2011).

OtrinArtManagement has confirmed a cooperation with the Slovene National Theatre Maribor as the official agent by the rental process of the scenery and costumes from the ballet “La Bayadère” with the “Teatro dell’ Opera di Roma” (Opening night October 9th 2011).

OtrinArtManagement started a cooperation with the Musiktheater im Revier Gelsenkirchen (2011).

On June 10th 2011 the TTM, ballet company from the Gärtnerplatz Theatre, will be opening the open air festival “June in Ljubljana” in Slovenia with “Romeo&Juliet”. The following performances will take place on June 11th and 12th. On June 13th and 14th they will perform “Summernight Dream”. The Choreographer is Hans Henning Paar.

Bojana Nenadović was invited to participate on May 29th 2011 at the international Gala Concert in Rome. Together with her partner Vito Mazzeo (San Francisco Ballet) she will perform the “Giselle” Pas de Deux.

On April 28th 2011, Bojana Nenadović is starring at the Gala Malakhov&Friends. Together with Giuseppe Picone she will perform the Pas de Duex „Narcissus” (chor. M.G. Garofoli)

On March 26th 2011 the opening night of the triple bill evening “körper.tanzen.formen” (eng. body.dance.shapes) is taking place. Bojana Nenadović will be performing the “tall girl” in the first part “Rubies”, choreographed by G. Balanchine. The following performances will be on April 02nd and 08th, May 15th and June 04th 2011.

On February 17th 2011, the opening night of Renato Zanellas new version of Strawinsky´s “Apollon Musagète” will be performed at the Teatro Filarmonico. Bojana Nenadović will be performing the muse Calliope. Giuseppe Picone is Apollon. The following performances will be on febraury 18th, 19th, 20st and 22nd 2011

Bojana Nenadović is performing the “Sugar Plum Fairy” in the Hans Henning Paar version of the “Nutcracker”. The performances will take place on November, 16th and 26th, December 01st and 16th (2010), January 15th and 28th and on February the 04th (2011).

Bojana Nenadović on the cover of Sublim magazine

In the Fall-Winter Edition (2010/2011) is Bojana Nenadović covering the magazin Sublim which is covering Spain and Latin America. On the cover is the photo from the ballet “The Merry Widdow”, choreographed by Maria Grazia Garofoli (Fondazione Arena di Verona). Her partner is Evgenij Kourtsev.