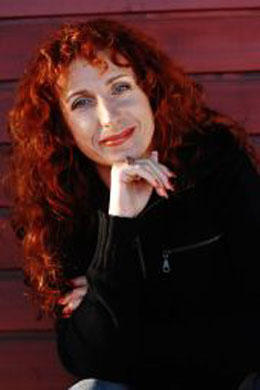 The chanson singer Vita Mavrič began her musical and theater career on the stage at the Ljubljana City Theatre in 1987 with a major role in a highly successful musical “U slovenačkim gorama” (eng.: „In the slovene mountains”) by Žarko Petan, Ervin Fritz and Urban Koder. In the same year the TV Slovenia recorded her solo recital “Pesem je ženska” (eng.: „The song is a woman”) from the composer Urban Koder, with the texts of various slovene poets. On this occasion her first music record was published.

A year later she presented an independent concert with the music by the composer Urban Koder and the lyrics by Janez Menart Ervin Fritz, Milan Jesih and others, in Cankarjev dom Ljubljana. After this concert she finally decided to dedicate herself to the slovenian chanson.

A series of successes followed:

• children’s musical “Bikec Ferdinand” (eng.: „The small bullock Ferdinand”) by Dance Theatre Ljubljana
• in 1991 the second independent music recital in Cankarjev dom Ljubjana,
• in 1992 musical-theater project with chansons by F. M. Ježek „Ne smejte se, umrl je klovn” (eng.. “Do not laugh, the clown is dead”), for which she has received the Župančič award
• the opera „Sneguljčica” (eng.: „Snow White”) by Bojan Adamič in Ljubljana Križanke
• the opening of the Ljubljana Café Theatre, which was founded in 1994 and is being led by her since then
• musical „Arabella” in 1995, produced by Café Theatre
• musical-theater spectacle „Nekoč bili smo v maju” (eng.: “Once we were in May”) with film and ballet, directed by Matjaž Pograjc, dedicated to her long-time colleague, the late pianist Borut Lesjak, and accompanied by the symphony orchestra under the direction of composer Mojmir Sepe
• second CD published „Sem kakrsna sem” (eng. „I am the way I am”)
• in 2000 she established an international music festival of chansons” La Vie en Rose ”
• presentation of her third CD with chansons of Bertolt Brecht and Kurt Weill „Hrepenenje” (eng.: ” Longing “) in May 2001 at the Ljubljana Opera
• in November 2006 followed the stage version of the music-theater project with the same title, dedicated to the 50th anniversary of the death of Bertolt Brecht
• in December 2007 the CD of Jewish (Klezmer) Chanson with quartet „Akord” was published

She still leads the Café Theatre and the international music festival of chansons “La Vie en Rose” and continues to play in her project „Hrepenenje” (eng.: “Longing”) at the Ljubljana City Theatre. She received international acknowledgement with the performances of Jewish chansons with a quartet „Akord”. The project „Hrepenenje” (eng.: „Longing”) was very successfully performed at the Brecht House in Berlin, the musical theater festival in Brno, at the famous cabaret theatre Akzent in Vienna and at the Diligentia Theater in The Hague. After two decades of enthusiastic artistic work she is firmly established although she says that this was only the beginning.